The legendary White Ring ski race at Lech-Zürs am Arlberg

The legendary White Ring ski race at Lech-Zürs am Arlberg

It was deep winter and Austria had been bombarded with metres of snow just as TMPR was leading a group of journalists our to Lech-am-Arlberg. The mountain pass to Lech had been closed for several days due to the huge amount of snowfall and potential threat of avalanche, Lech and Zurs had been working hard at clearing the roads and making the area safe and TMPR had arranged for a window in weather so that we would have several days of snow and bright blue skies.

It was January and the group was heading out to Lech to take part in the White Ring Race- A legendary circuit race consisting of 1000 racers covering 22kms around Lech, Zurs and Zug. The circuit comprises 5 downhill runs, 5 ropeways, an intensive ascent and a challenging backcountry ski run. The race starts on the Rüfikopf mountain. Every 100 seconds a group of 20 people dash around the Omeshorn mountain to Zug via the Schüttbodenlift, Trittalpbahn and Madloch ski runs. From there the chairlift takes racers up to the Balmengrat, from where the last section leads down to Lech. To thunderous applause, the 1000 participants are lauded at the grand finish line.

To take part in such a race the team would need to be pampered, well fed and generally looked after, so The Post Lech was to be our home for the next few days. The Hotel Gasthof Post is an institution in the beautiful alpine town of Lech. The atmosphere of the hotel has grown from a long family tradition by transforming a strong, proud farmhouse into an extraordinary luxury hotel without giving up on the authentic “country” charm. The hotel houses four fabulous restaurants from the traditional hunting lodge-style “Jägerstube” the Kutscherstube, the “inn” of the hotel serving Austrian culinary delights where hotel guests can enjoy their half-board option in a charming setting to the stunning Postblick restaurant serving extraordinary gourmet delights.

The first evening we dined in the Jägerstube restaurant, a small and very cosy traditional wooden room, where we were slowly worked through eight absolutely divine courses all accompanied with wine pairings. With fine conversation and superb Austrian hospitality we whiled away the hours into the evening until it was time to retire to our very comfy rooms. The next morning the skies were bright blue and the mountain air fresh and chilly. After a good hearty breakfast at the Hotel Post, we made ourselves ready in our ski gear and met with our Ski guide for the day. We made our way to the top of the Rüfikopf cable-car, where we could start our practice circuit run of the White Ring. Near the end of the course we stopped in for a slap up lunch at Der Wolf and eventually made our way back to Lech to pick up our race packs with bibs. That dinner we dined at The Post Lech and the team made their way to bed nice and early in the readiness for the race.

The next day the group was up early and straight down to breakfast to fill up on calories for the race, then it was up to the top of the Rüfikopfbahn. The crowds of racers were already gathering around the start line and there was a party atmosphere already. Last year’s winner plus the best of the time-trials lined up and before we knew it they were off. Now it was just time to wait for our time slot. Once in place, the countdown started and then we were off, first off was a hill climb and then the first of the five legs. It was cold to start, but after some thigh burning downhill skiing, the blood soon got pumping. Flying from Lech through to Zurs and then up to the Madloch where the longest and hardest stretch lay ahead,  a backcountry run that was in the cold shade. Each of the team survived this part and made our way through Zug and to the top of Lech, from here it was the easier and final fun leg down to the crowds and the finish line of the race. Once past the finish line it was time to party with the crowds, from the mountain huts to the town everyone was in a party atmosphere. The day culminated in the White Winners Night party at the Schneggarie with fine food and plenty of wine and cocktails. 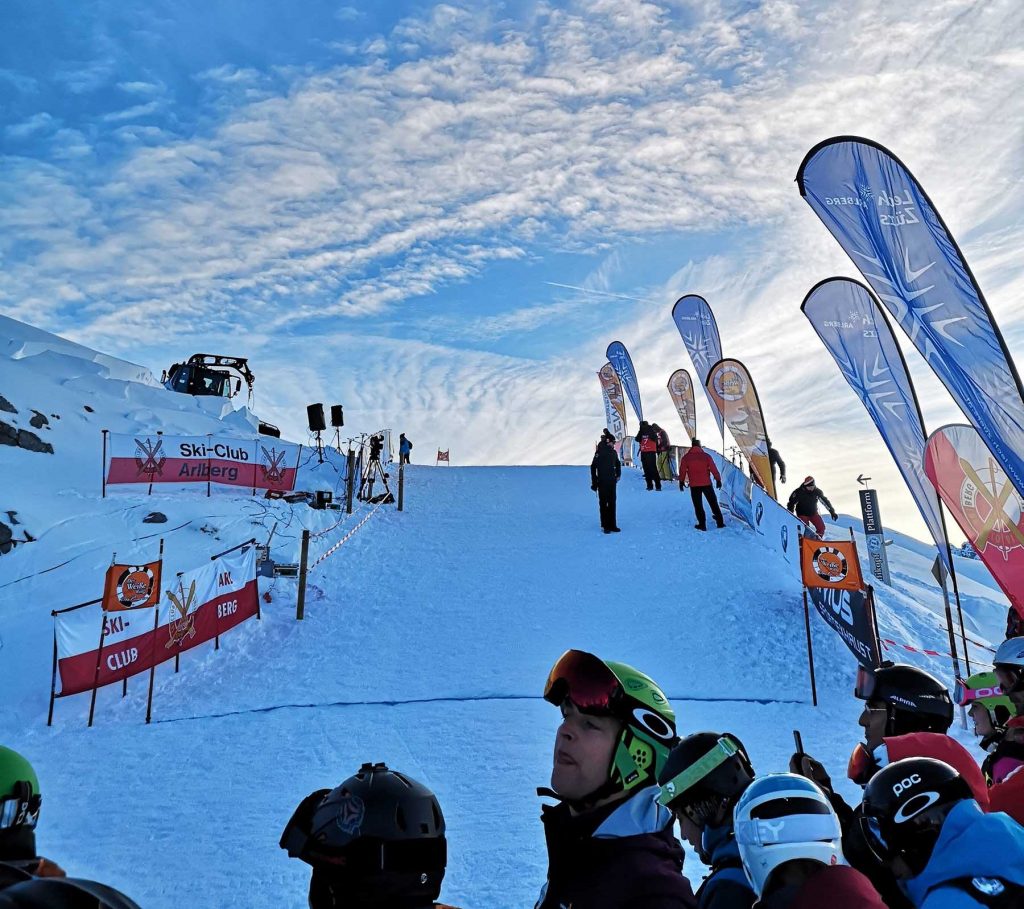 The following day was a day of gentle skiing in the fine weather in Zurs with a fabulous lunch up at the Trittkopf BBQ Station. The eight hour barbequed meats were outstanding and the views breathtaking. Eventually we all headed back to the Hotel Post for our aching bodies were booked into the Spa where the masseusers would pummel and kneed our muscles back to health. That evening we all ate with Florian the owner of the Hotel in The Postblick restaurant. After an amazing renovation, the restaurant was recently placed under the direction of Tyrolian Head Chef David Wagger, a true wizard in the kitchen. The setting was outstanding and the food sublime. Florian entertained us into the evening with stories about the hotel and his worldly experiences in hospitality. Eventually it was time for bed and the end to a fabulous press trip at the Post Lech. 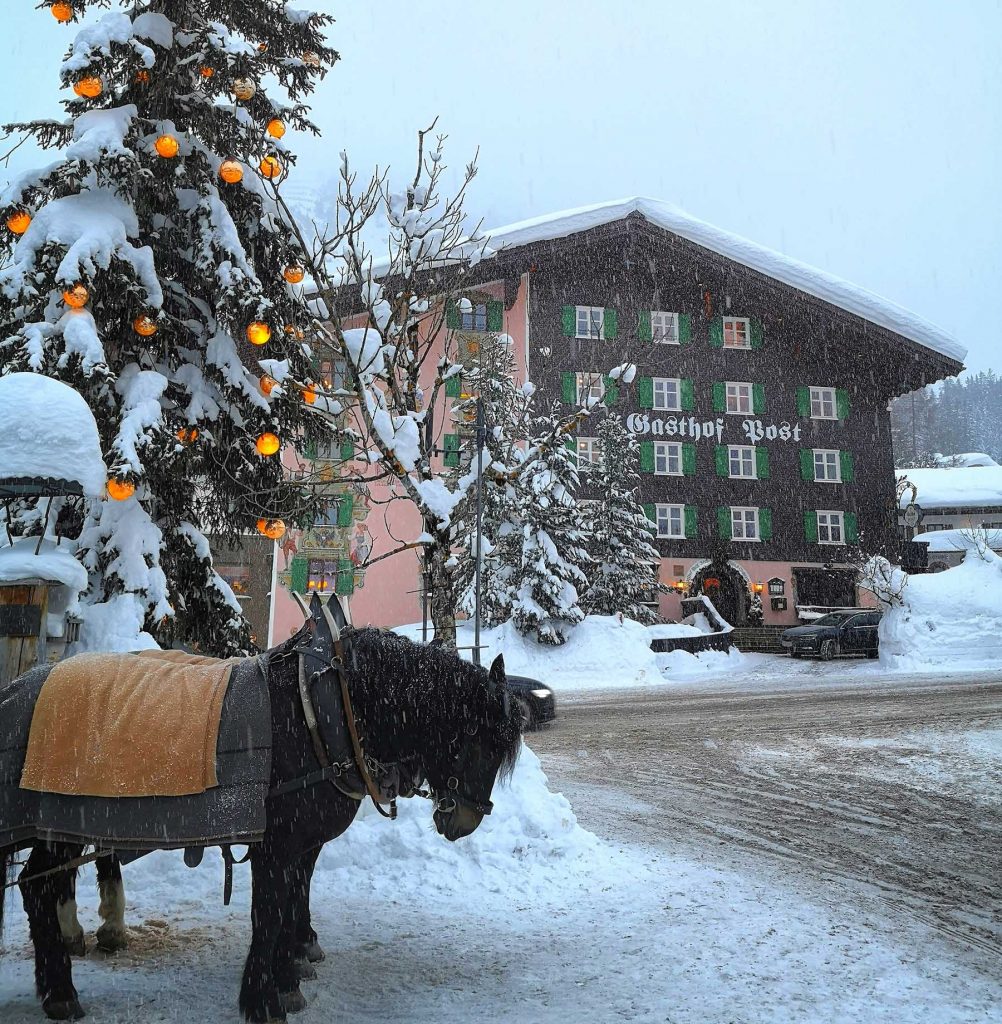 Pop in for an espresso or glass of bubbles, we would love to talk.